My name is Hendra Jatmika Pristiwa. Im blind since I was born. My uncle introduced music to Me when I was 7 years old. The first instrument that I learned was Guitar. Since that time, I liked music very much. I often joint the music contest, even it was started from the smallest scope.

Though Im blind, its not being an obstacle to reach My dream. I studied in the public Elementary School with non-disabled students. It helped Me able to socialize well, had a good achievement, and also able to compete with many people. I continued My study at the School for the Blind. The purpose was to learn about orientation and mobility, independency, and other ability which havent been learned in the previous school. 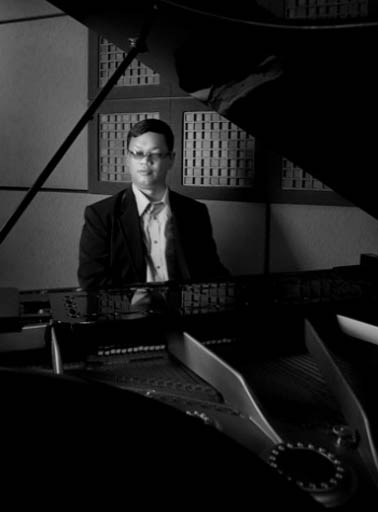 I started to play music professionally when I was in Senior Highschool. I was playing music in some cafes with My non-disabled friends. I also tried to increase my musical capability by learn some new instruments, such as Drum, Bass, Piano, etc. But, actually I more master and prefer piano than any other instruments until now. Thats why, I also known as Hendra Piano Man.

After graduated from Highschool, I more wanted to broaden My musical knowledge. Then, I decided to study in the Musical Education program, Institut Keguruan dan Ilmu Pendidikan (IKIP) as known as Universitas Pendidikan Indonesia (UPI) in Bandung. I succeed being the first visually-impaired student there, of course with My hard effort. During My study, I became more often playing music regularly in several places. At that time, I also familiar with the recording and I was asked to play some instruments for the recording need of some famous musicians. Although I was not recognized as the instrument player in those songs, I got many experiences, such as new technique and musical genre easyly.

Since 2000, I began operate computer with screen reader, a software that helps blind using computer. I also found many hardwares and softwares which can be used to create a digital music recording. After learning autididactic for about two years, since 2002, I started produce some recordings with very standard equipments. Gradually, My musical ability was increasing. I completed My recording tools little by little, so that I could be more professional. Finally, I got a home studio, that already produced hundreds of musics, certainly because of My musical and technology knowledge which always expanded by Me.

Until now, Ive made many arrangements, composed some songs, created jingles, music illustrations, cabaret, and also being a trainer for digital music recording. I have many instruments, such as Electric Piano, Keyboard, Guitar, Bass, Violin, Saxophone, Cajón, Mandolin, and some traditional instruments like Ukulele and Sundanese Whistle. Besides, I also have many software collections for recording and several hardwares such as headphone, microphone, sound card, that are specialized for professional arranger.