Mario Contarino was born in Rome in 1984. He was diagnosed with Duchenne muscular dystrophy when he was 5 years old. Mario has always lived in Rome.

Mario has always been keen on drums... He would always play with his mother's saucepansindeed, due to his passion and his hate for studying, Mario left school at the second year of High School.

In 2000, at 16, he joined the pop-rock band "Ladri di Carrozzelle" as a drummer. The group was mainly composed of guys with the same pathology as me.

Mario says "The drums were divided by four of us playing with electronic pads, so I had the chance to learn about rhythmic reading as much as writing of the instrument. I joined the group till the summer of 2006. In those six years we played all over the country, reaching the number of 600 concerts in Italy, taking parts in many important events and Tv shows. 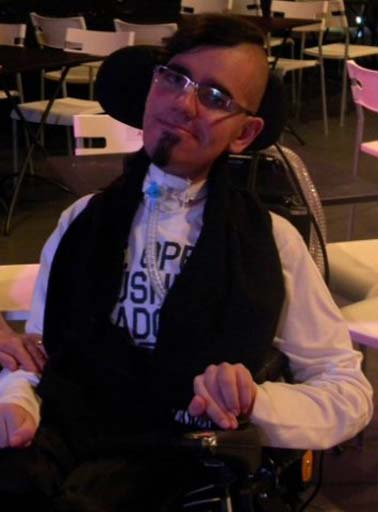 One of these events, actually the most significant, was in Rome "Concerto del primo maggio 2006" in Piazza San Giovanni, standing in front of thousands of people, live on national broadcast. I left the band because of some problems with some guys in the band and of the staff".

Because of Muscular Dystophy, Mario lost the strength to play.

With the help of his PC and technology, at the end of 2007 Mario began composing, using "Steinberg Cubase SX" and some VST-plug-ins (of which: Native Instruments Abbey Road Modern Drums, Bornemark Broomstick Bass, Native Instruments B4, MusicLab RealLPC, Native Intruments Guitar Rig 4, IK Multimedia Amplitube 2 and more) rock instrumental music; then he created a personal project named TBP, by which, for fun, from the summer of 2011 he converted almost 30 famous songs into hard-rock instrumental versions.

But mainly, TBP project consist on transfering emotion and state of mind into original instrumental songs, with different variety of rock (hard rock, funky, progressive, fusion, blues, metal and more). On 13 November 2012, "Universe Of Emotions" was released, with the label Zeta Factory, this was the first album for the project TBP.