Ronnie Ronnie a.k.a Muwanga Ronald is Ugandan, an experienced Journalist by profession and one of the promising disabled talented singer in Uganda, a lonely child born to the late Joseph Kaboggoza, a retired carpenter and late Margaret Kuwebwa.

I was born a normal bouncing baby boy in 1976 in Jinja Hospital but at the age of three years according to the information availed to me by my father, I got a boot of malaria which led my parents to sought advise from my aunt the late Mrs. Theresa Najjemba who was by then working as a senior midwife at Busesa Dispensary in Iganga District.

She advised them (my parents) to take me to Busesa Dispensary where I found my lower right limb fate after being injected on the nerve. 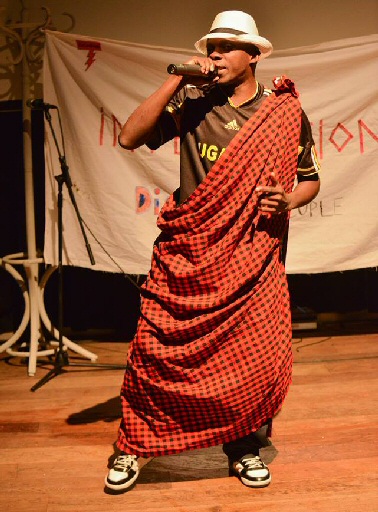 Before my mother died in 1990, she had told me that before the physical effect on my lower right limb could worsen, I did not take much time to start walking as a baby and used to run fast and play with my fellow younger stars as a normal child.

But when I got the injection, I lost much weight and the physical appearance of my lower right limb was alarming as it was growing thinner and thinner day by day compared to my lower left limb she added.

She said I could neither play, help myself to stand nor walk but only left to sit and cry. I become a baby once gain thus it was a hard learning moment and time for them as parents.

Before she finished telling me the whole story, my eyes had become wet with tears. I tried to hold them but could not help out any more due to the physical life experience I went through at such an early age.

This was a time of temptation and forgiveness for me, something I had never taken time to think about as a young boy although I am a strong catholic believer. It was so because it took both my parents to make me believe what went wrong with me lower right limb.

It was such a moment of tension and cursed myself as children I used to play with both at the neighborhoods and schoolmates used to give me hard time by trying to limp hence walk like me and at times abusing me such abuses like "akalema" literary meaning "a small lame person", "Katonda kyava yakukuba omugo n'olemala" literary meaning that is why God made you lame.

In 1998, I once lived in the same location of Bugembe in Jinja District with one of my long time friend by the name Joseph with whom we went to Nakanyonyi Primary School as classmates in P.1 (elementary class one).

I knew I had a problem with my eyes as they are squinted (not straight). One time we had a dispute with him but openly told me "wenna omubiri oli mulema" literary meaning "all your body parts are lame". Surely, it took me time to believe it was him who abused me like that.

One time also in 2001, I and my brother in law had escorted my wife to the Park Yard of St. Balikuddembe market the former Owino market in Kampala to get shoes, one vendor around where they sale second hand shoes shouted to my wife "omulema taba na mukazi" literary meaning "a lame person can not have a wife".

I was uncomfortable, so embarrassed and felt too small in front of my in law and wife and even regretted why I went there.

At several occasions, I have also been denied vacancies or chances to work with different Non Governmental Organisations and Companies due to the physical nature of my disability, as some required a driving permit although I possess good qualifications and qualities of a person they want.

With such kind of life experiences, I came to confess why I was born to have hard life with a harsh and rude society.

While at home in December 1990 after the death of my lovely mother questioned my father why they decided to take the advise of my late Aunt Theresa to take me to Busesa Dispensary and by passed Iganga Referral Hospital? And if knew where the doctor was residing.

Before he could answer any question he looked at me while asking why I had asked him such questions. I told him am not angry any more but just wanted to know. He took time thinking about it but later said the doctor died in August 1989. I did not wait for the answer to the second question but immediately told my father let his soul rest in eternal peace.

I told my father that if he had told me the doctor was still alive, he was going to take me to his home to visit him and talk to him about the difficulties I had so far faced with the society due to being lame. I was ready to forgive him but I forgave him and asked the Almighty God to judge him with mercy.

He said they tried so much to do whatever was possible with the little resources they had to rescue my worrying situation by visiting different professional doctors in Jinja and Iganga Hospitals but nothing was positive but only left to pray to the ALMIGHTY for both their and my mercy.

He said my mother entrusted her prayers to Mary the virgin mother, and she got answered. I started leaning of tables, chairs and could support myself but with a lot of difficulties until my lower right limb become strong enough to lift and support my body.

After the funeral rites of my dear mother, I returned to Jinja to stay with my father to spend my Primary Seven vacation. It was so painful; my father was not able to attend the burial of my mother. He did not get the death announcement in time.

As a staunch catholic, I started attending daily and Sunday church services. I was then trained to read gospel readings and as an altar boy due to my active participation in the church activities at St. Luke Holy Cross church, Bugembe in Jinja.

Then joined Jinja Senior Secondary School in 1991 but sat for the Uganda Certificate of Education examinations at St. Peters High School with the assistance of Reverend Father Robert Hesse of the Holy Cross Congregation based in Jinja Catholic Diocese and Kiira Academy now Kiira High school for A level helped by Mr. Muloki Robert Balidawa.

In 1998, I joined The United Media Consultants and Trainers, School of Journalism for an award of a Diploma in Journalism and Mass Communication, which I completed in 2000 assisted by Dr. Paul Waako the head of Pharmacology of department of Makerere University Medical school and Engineer Tibalwa Ziria Waako.

Surely many people will agree with me that it is so hard for one to discover his/ her natural gifted born talent until you are so much down played or disappointed on which way to survive unlike those who straight away get to know their talent through mentors.

It took me quite a decade before discovering my music talent. It came about after being laid off as a correspondent based in Iganga district for WBS Tv, a television in Uganda.

One day just woke up told my wife (Harriet) I was going to start writing songs then one day become a renown super star in the music industry both on the Ugandan and International scene.

Harriet got so much interested to help me since she was and still very much in passion love for music although she could not believe my natural talent proposal search. She asked me how I would make it since she had never seen any music talent in me because I could sing my favourate songs of other singers partly or even with wrong words.

For surely, this was a situation I could not deny or blame her claims about my talent because I could not even sing my favourate artistes songs. I could sing them partly sometimes with wrong words.

Although I loved to sing very much during my primary school days at Namalemba Mixed Day and Boarding Primary School, I was inspired by Sylvia Kyansuti of Okusunasuna and kitumbugulu fame who is a Jinja based singer then Bobi Wine of Taata W abaana, and Bada fame a city (Kampala) based singer.

At Namalemba, I was not given attention or courage by the different school and house choir masters which down played my interest in music.

To me, I think it was because I am physically disabled with the right lower limb that during the matching to the different competition stages, I was not uniformly walking like the other school choir mates.

With a lot of enthusiasm at times, I used to force myself to participate in the school house competitions and also force my way onto the school or hired track to escort the school choir to the county, district or national competitions.

I become a friend with the self styled ghetto president of the Fire Base Crew, Bobi Wine in 2000 when we met at the former Cyber Café at Wandegeya near Total petrol station. I did not know he was a singer although he had Rastafarian styled made hair. We exchanged our contacts and left each other. This was when he was working on the "Kagoma Kalubendera" album and was a student studying at Makerere University for an award of a diploma in Music, Dance and Drama.

The influence and determination leant from the two artistes, Bobi wine and Sylvia Kyansuti, I got all the courage. Hence in 2003, I settled down at my fathers residence at Lubaga near Kabaka's Lake while my wife was staying at her uncles residence at Seguku on Entebbe road, I managed to write and composed Omukyala W Africa song.

Currently, I have written quite a number of songs and have two albums of six songs each including gospel songs with rhythm compositions in Ragga, Reggae, Dancehall and contemporary styles.

Since then I have never looked back but pushing on with the singing career which has seen me being a member of Krip Hop Nation comprising of artistes from USA, Africa, Germany and UK then also being invited at the launch of the British Council premise opening in Kampala, in UK in 2010 and 2014 during the DaDa Fests.