Bart was born with a rare physical disability called Arthrogryposis which means that he has weak muscles and stiff joints. After Bart was born, doctors said he would never walk and may not ever have the strength to be able to sit up independently, and he would have a bleak outlook to life.

Bart was brought up in a Christian family and he made the decision to become a Christian himself when he was 5 years old. At a very young age, the Pastor of his church prophesied to his parents saying, "Little by little he will be able to do more and more new things that will amaze people." The Pastor prayed for two things specifically:- 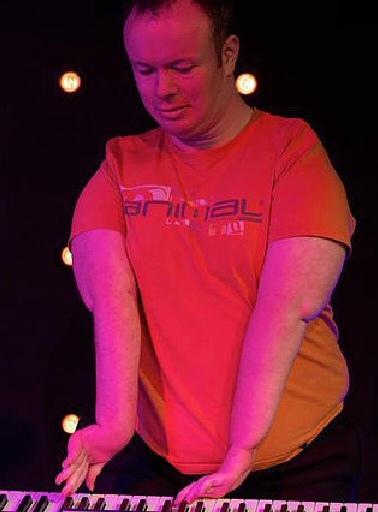 Bart started to walk when he was 3 years old and, since then, has been able to take part in many different activities at varying levels of ability including running, football, table tennis and swimming.

Bart has had the opportunity to take part in three open water swims to date.

Bart, in the white swim cap nearest the camera, took part in this 750m swim at the Cotswold Water Park in the summer of 2014.

At the age of 5, Bart wanted to learn how to play the piano. Doctors said it would never happen and there was even doubt as to whether he would have the strength to press down a key. However, Bart started having piano lessons and he gradually progressed so that at the age of 11 he passed his Grade 5 piano exam.

When Bart was 19 years old, he moved away from home for a year and went to Nexus Academy of Music Ministry in Coventry and this was where he really developed his ability on the piano.

Bart is now 34 years old and he lives a relatively independent and normal life. He plays piano every week at Hope Church, Malmesbury. He is also able to drive a car which has been adapted.