OK, let's get this out of the way: Bill Clements is NOT your normal bass player. His lines are fluid yet percolating, very reminiscent of Rocco Prestia... on drugs, with some Jaco thrown in on top. His drum and bass workouts are a crash course in funky grooves, interesting note choices, the art of syncopation and more. Oh, yeahhe does it with one arm.

You wouldn't know it by listening to him. A flurry of machine-gun, syncopated sixteenths flies into the air - yet it's all about the pocket, even so - and you'd think Bill had three hands, not one. He has long received strong regional acclaim and has been favorably compared to Marcus Miller and Stanley Clarke. As uncompromising as he is unconventional, Bill turned a huge obstacle into a challenge of heart and spirit. Seemingly easily overcoming that challenge. He stands as a shining example to us all, not just for his determination, but also for his flat-out amazing chops! 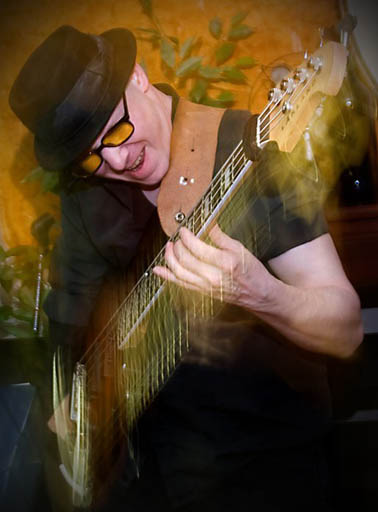 Inspired by Geddy Lee, Chris Squire, and other prog-rock bass giants, Bill began playing bass at the age of 13 and decided early on, one way or another, bass playing would be his path. Forgoing a formal musical education, Bill instead embarked on an intensive program of practice and musical research.

Bill lost his right forearm and hand in an industrial accident in December, 1989. You'd expect that such a tragedy would end a promising career for the budding professional, but Bill was back on stage in less than two months, and hasn't stopped gigging since. His exposure in Bass Player Magazine has led to greater interest in his music and brisk sales of his album Undergroundalienbass, released in 2005. Filled with studio and live cuts from the past decade, the project showcases Bill's exceptional artistry and quirky songwriting in a style he calls "Punk Jazz". In the summer of 2010, Bill released two additional albums; Captain Midnight and The Trio both of which were recorded at Radical House in San Francisco, CA. Considered to be a record you can throw on during a party and everybody would have a good time, Bill views Captain Midnight to be a "benchmark" for where he was three years ago  more jazz-fusion focused. The Trio is a series of studio jam sessions between Clements, Tommy Ufkes and Ron K., before the other musicians arrived in San Francisco.

In 2016. Bill along with other Can-Do Musos members were involved in the We're The Superhumans campaign in London for the Rio 2016 Paralympic Games.