One of South Australia's gem stones of musicianship. Chris Finnen was born 24th December 1952 Sussex England and migrated to Australia in 1967. Radio, the popular music of the day and his father's extensive record collection were his early musical influences. The raw honesty of the blues is the lifeblood coursing through Chris Finnen's music.

Over four decades travelling as a troubadour journey man has seen Chris Finnen often referred to as the guitarist's guitarist'. Chris brings a wry twist to his original blues song writing, adding sly humour to lyrics, focusing on the musing of everyday experiences, and embracing a strong sense of community.

His restless musical curiosity has seen him embrace a tapestry of varied cultural influences, weaving the sounds of India, Celtic traditions, and African nation's into his music. 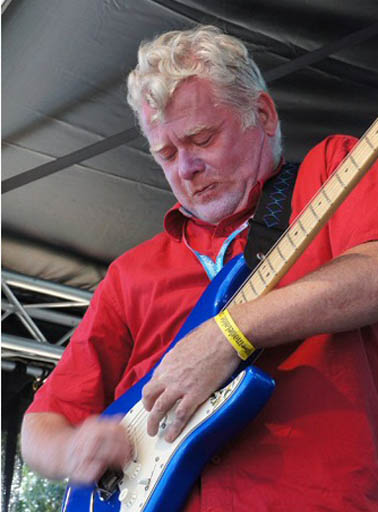 This has resulted in a career rich in variety and encompassing diverse opportunities from film scores, theatrical productions and musical therapy.

Chris performed for the Dalai Lama in 2005, was a guest of the International Expo in Nagoya, Japan, and has shared the stage with some of the world's best, including Buddy Guy, Bo Didley, Jimmy Witherspoon, Roy Buchanan, Eric Burdon, Keb Mo, Bob Brozman, Johnny Copeland, The Homes Brothers, John Mayall, and Mavis Staples. He has worked in Australia with Matt Taylor, Phil Manning, Dutch Tilders, Margaret Roadnight, Jeff Lang, Kevin Borich and Colin Offord. The list goes on

Little wonder that Chris was inducted into the South Australian Music Hall of Fame in 1995.

In 2013, Chris was nominated for a pride of Australia Medal for his work in community and mentoring.

A regular on the Australian club and pub circuit with a long list of festivals and workshops to his credit, come along to a Chris Finnen performance and catch the unexpected.

Adelaide Fringe Review from The Australian February 2013: "Chris Finnen is one of Australia's most innovative guitarist. He took us down to the crossroads and off into space, from Delta Blues to Chicago, from Adelaide to Northern Australia via India and Africa."

Chris Finnen shows how to be authentic and make it your own, a mature musician of some years, Chris still plays with the wonder and explorative sense of a child as he coaxes a range of sounds and tones from his guitars. Final word ELECTRIFYING.

Chris continues to tour Australia making regular visits to Darwin with his N.T band, The Darwin Blues Boys, and Victoria with his Victorian outfit, the Melbourne Blues Disciples. Other parts of Australia are visited regularly with a variety of interesting musicians.

At the moment, Chris is working on his book Finnenism, and is also involved with an ongoing series of recording projects.

2015 will see in the new live DVD and CD, plus a studio folkloric album.