Jason Barnes is a young drummer from Georgia. His dreams were shattered when he was electrocuted by over 22,000 volts of electricity arcing from high voltage lines while cleaning a restaurant exhaust duct on the roof of a local restaurant in McDonough, Georgia.

Being a world class drummer and professional musician was his lifelong dream.

Jason was accepted into in the drumming program at the Atlanta Institute of Music in 2013.

According to the doctors, he should have died that afternoon. Jason endured numerous operations to save his right arm, only to find that amputation was the only option. Jason thought that he would never be able to play music again.

About a week after his release from the hospital, he dragged his drum kit out and proceeded to tape a drumstick to his bandaged stump. 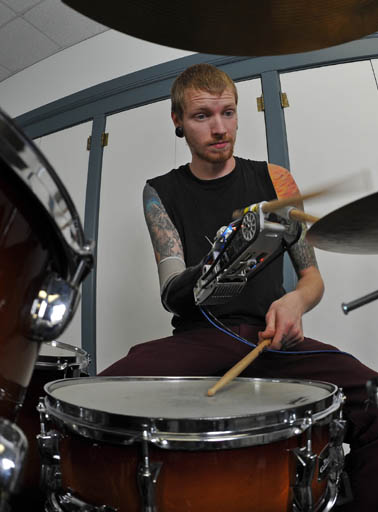 Jason was convinced that if he had the right prosthesis he could continue his dream of being accepted into the Atlanta Institute of Music.

He continued to play drums using a very basic drum prosthetic that he designed and became very proficient.

Jason's lifelong dream has been to play musicreal music that moves people. Just because he lost his forearm didn't mean he lost his God given gift. He just has had to get a little more creative and innovative. The music program at Atlanta Institute of Music is helping him advance his technical skills and preparing him to become a premier drummer.

Jason says "What is motivating and inspiring to me is the challenge of being able to push through the barriers of beliefs and fears that prevent us from accomplishing our goals and becoming all we can be. I refuse to let losing an arm prevent me from fulfilling my dreams... Nothing will stop me"

What motivates and inspires Jason is the challenge of being able to push through the barriers of beliefs and fears that prevent people from accomplishing their goals and becoming all they can be in spite of the challenges in life. Living life to the fullest!

It is believed by many that know Jason, that through his drumming, and disability, he will shatter the limiting beliefs about what is or isn't possible. Jason's hope and desire is that he will become a living inspiration to others that encounter similar life challenging situations.