Challenge: Born with One Arm

Lefty Williams has established a respected and endearing reputation as a great rock guitarist and songwriter through the age-old adage of building an audience one fan at a time. Over the last decade, this legion of supporters has grown exponentially with purity. His songs have real depth and power. They are more than just catchy pop numbers that speak to the heart about issues of life and the experiences we all share in the passage of life. His playing is reminiscent of Jimmy Page, Dickey Betts and Eric Johnson, while at the same time frequently receiving comparison to the great lineage of Georgia reared guitarists that include Robert Cray and Duane Allman. With the release of ALL IN, and a new relationship with Tree Leaf Music, his future continues to thrive.

From the age of four, Williams had picked up a guitar and began to explore the greats. By eleven, he was playing in bands. His father, Doug Williams, was his first teacher, and self taught as Lefty is. He shares, "I'm guessing here that his dad Papa Williams taught him a few chords and how to learn by ear. Then he ran with it. That is how I learned. My father was always patient with me and waited on me to find my own ways of doing things. I cannot ever remember him getting frustrated trying to teach me. 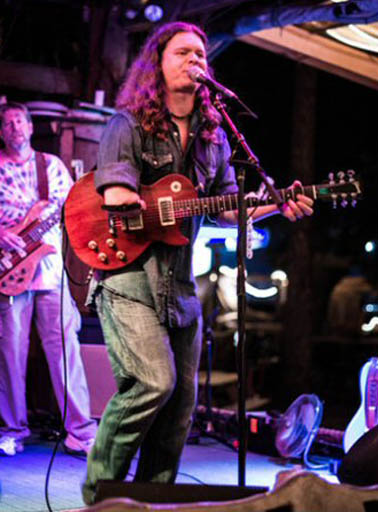 He always told me that I can accomplish anything that I set my mind to doing. So far, he's been right. Papa used to tell me that I could be a famous musician if I tried hard enough." He learned problem solving and perseverance early to overcome the disability of having only one hand. At the age of six, to play the guitar he had to come up with a design that allowed him to express the musical feelings that were flowing through his veins. He remembers, "My mother's father (Pawpaw) helped me come up with the pick design. I did most of it, and he just made a few suggestions here and there. He probably had an idea for the whole thing but wanted to let me figure it out on my own. He was a brilliant, God-fearing, and loving man. We were very close."

Williams went to Sprayberry High School just outside of Atlanta in Marietta, GA. He got married young, had three children (Darrell 22, John 19, and Caroline 18), and placed his pursuit of music on the side to provide for his family. He remembers, "A few years later when my wife and I split up I was at a crossroads. I had a good job but my life was falling apart. The band I was in was disintegrating. My marriage was over. I felt stuck. Musically I had done as much as I could and needed some kind of professional instruction to help me move forward. So I auditioned for AIM (Atlanta Institute of Music). I was immediately accepted and enrolled that day. School was fantastic for me. I was surrounded by a bunch of people who all wanted the same thing I did, to make it big. It was a competitive environment that played to my 'never give up' and 'always do your best' ethos. I was working full time, going to school, and raising three children with my ex-wife. School brought out my love of Jazz Fusion, and a natural propensity for odd meter music. I composed a song for my children called Mes Petits. It was an instrumental piece comprised of 6 time signature changes and various stylistic changes. I performed it for my graduation ceremony in 1999, got a tremendous response to the piece, and shortly after I graduated was offered the opportunity to teach the Odd Meter class. I taught at AIM from 2000-2002 until I had to leave because of my touring schedule." While there as a student, Williams met a bassist named Rayanne in 1998.They've been together since they met, and married in 2002.

Williams released his first CD, BIG PLANS in 2006. It was produced by John Keen (REM, Widespread Panic), who said, Leftys sound is a compelling combination of honest, heartfelt lyrics and masterful rhythm and blues muscle." His next offering SNAKE OIL, issued in 2008, was nominated for Album of the Year by the Homegrown Music Network. His latest ALL IN marks the start of a new alliance with Tree Leaf Music. Williams offers, "Tree Leaf Music is the label that Tree Sound Studios started up. Paul Diaz and I have been friends for years. About 2 years ago I hit him up to be considered for his new label. I had 25 songs that I needed to record and it had been 3 years since SNAKE OIL was released. Paul asked me to bring him some demos of the tunes. So I did and he loved them all. He signed me right there on the spot." Produced by Ashley Dennis, ALL IN also marks a partnership the duo has created that grew organically from a weekly jam Williams ran for years. He recalls, "I hosted a jam in the Atlanta area for seven and a half years, first at Charlie Mopps Pub and then Bella's Pizzeria. Ashley and I met through my drummer Preston Holcomb. He was a regular, and we hung out every Monday for almost a year before I ever even knew that he was a professional sound engineer/producer. After a little back and forth, challenged by time commitments, once he heard the songs he really bent over backwards to make the time to make the record. The best thing was once we started working together we realized that we think the same way and share a lot of the same ideas. So we would get into the studio and I would say 'this song needs..' and he would finish my thought and vice-versa. After a few years of getting to know each other it seemed like a logical step to hire him to manage me." Williams also enjoys partnerships and support from Curbow Stringed Instruments, Celestion Speakers, Mad Professor Pedals and Andrews Amp Labs alongside others.

ALL IN presents a body of repertoire that is both melodic and accessible to any listener. The songs are soulful, and exhibit an artist wherein the fact that Williams has only one hand should be nothing more than an afterthought. The vocals are reminiscent of Plant, Redding and Allman in their expressiveness. The track "Crescent" captures a story of meeting a girl on a train headed to New Orleans, loosely based on Rayanne taking Williams on a birthday trip on the Crescent Line. With "You Know I Love You," he pays tribute to his wife on their 10th anniversary and shares, "She puts up with me being on the road all the time, and I wanted her to know that I know we can make it through anything that life throws at us." "Let It Roll On" is simply a happy song about waking up in a good mood, while "You Dont Tell Me" is the antithesis as Williams reveals, "I wrote this song in the middle of an argument with my wife." He continues, "I was ironing my clothes and I was going over the argument in my head. I have always been fond of saying You don't tell me...I tell you I'm not sure where it came from but I've said it for years. So when I said it to myself it occurred to me that everybody knows what it's like to go through a break up. At some point everyone wants out of a relationship. Even though I wasn't considering leaving my wife, I decided to write a song about breaking up with someone but not being mad at them, just over it." Williams continues to thrive as a touring artist. Whether headlining or sharing the stage with others as a support act, he brings a different vibe and atmosphere to any venue he appears in. He feeds off the crowd, allowing all in attendance to have a part in the experience and vibe creating. He is a gentleman, and a simply a nice guy who cares about his fans going out of his way to try and meet every single soul who attends his gigs walking the room after a set offering thankfulness.

Blues stalwart Tinsley Ellis, who played on SNAKE OIL, once shared, "I was knocked out by Lefty the first time I heard his music. I just knew that I had to seek him out and hear more of his stuff. He is a veritable triple threat on certainly guitar, but also as a soulful vocalist and clever songwriter. The fact that he is out there winning over fans one at a time with his nonstop touring schedule is definitely something that I can relate to. And with the success he now enjoys, Williams remains humble. He reflects, "I do not aspire to sell out arenas or be on the cover of Rolling Stone. I will be perfectly happy playing in theaters and touring all over the world. My biggest hope is to get out of the van and into a bus and be able to make a comfortable living playing my guitar. I want to take care of my family, my band members, and the people on my team to the best of my abilities. And, I want to connect with my audience on a deeply personal level that allows me to make life-long fans." If karma plays a part in the existence of humankind, Williams has a lot of good coming back his way as he enters the next chapter of his career with the release of ALL IN.