Luis Adolfo Dorieux is a drummer from Argentina, who has been playing for over 46 years. He says "Many nights of blues and rock and roll, streets, bars, cabarets, nightclubs, taught me the magic of Battery"

After almost 5 years, Luis is back with his band Fish Gordos, on Sunday 27 December 09 at Independence square in Mendoza, Argentina in the World March for Peace. Luis' official return to the big guns - was in the JB Alberdi Theatre in Salta, Argentina on the May 22, 2010. 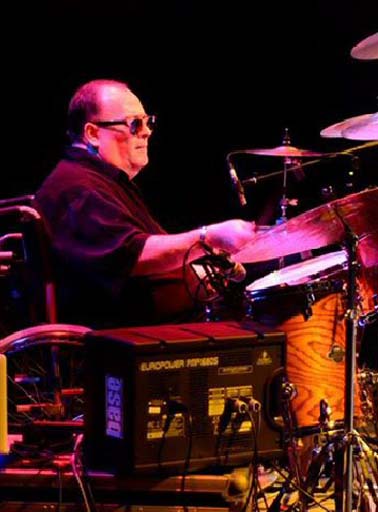 On August 1, 2010 - Luis was a participating guest of DRUM CAMP LAS VEGAS - 2010 - Las Vegas - Nevada - USA - From 27th November til 1st December 2010. The Las Vegas Drum Camp is an event organized by the Master Drumer - Carlos Skinfill - is a unique event with some of the most important in the world of music drummers, from the US Carlos Skinfill, OldairArau, Luis Campos, Dante Roberson, Matt Murphy, Michael Anthony King, Hurtwitz, Deborah Müller from Germany, Absalon Ruiz from Mexico, Carlos Figueroa, and Luis Dorieux from Chile and Argentina.

After the camp, Luis was invited by the singer Leeanne Whitaker and her husband, Stanley Whitaker - guitarist and vocalist for the progressive rock band OBLIVION SUN, and bassist and producer Lee Townsend, to give a talk in Pandonia, Maryland, and demonstrate an example of his life as a drummer and musician of blues and rock and roll. This hada beneficial purpose for Luis to get his best prosthesis to retry walk again.

In 2013, Luis was an artist exhibitor for Exodus Cymbals and AJP Custom Drums at the NAMM Show in Anaheim, California.