Miguel Pereira is a guitarist from Vila Nova de Famalicão, Portugal who lives with the challenges of having Schizophrenia.

Miguel says "Schizophrenia interrupted my life at the age of nineteen, I had proper treatment only about the year 2002. I am a little confused about time. My thought was mixed with fantasy I had no logical foundations for my behaviour". Miguel was an internment in public mental health institution system several times. Medication was too hard to support, and after taking the prescribed medicines he seemed to not have delirium, on the other hand thought was nothing like before, "it was petrified", not fluid.

In 2004/2005 Miguel was sick, unemployed and felt hopeless, but he always wanted to work and subsist. 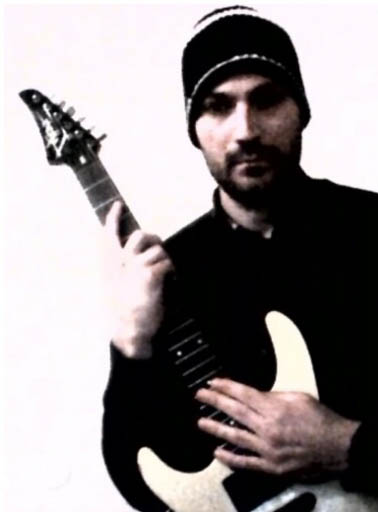 There were not any jobs available, so Miguel joined Portuguese Army as volunteer trough the local employment center. He adds "I worked for few time, they found me depressive and unstable, and treated me for six months in Militar Hospital, in Lisbon. There some of my memories disappeared forever, specially from that time. Last time was in a public psychiatric hospital was in 2005/2006 when I was finishing a course to be an archivist".

Miguel used to play music and listen to it ever since, musical instruments and sounds always attracted him. He says "Mainly I wanted to be a Musician in first place. My father had a guitar, and gave me a keyboard when I was a child/teenager but I already knew something about music, because I belonged to Banda de Famalicão, a school and the band of our city. I play guitar since about my fifteen years old, I had a lesson per week of classical guitar at that time. I continued until I started my engineering studies that I never more concluded after being sick at that age. In between my passion for the electric guitar started to grow. A friend introduced me to the work of Joe Satriani, the musician that most inspired me in relation to the guitar. I interrupted countless times of playing due to the illness, uncertainty, for being precarious in life and many reasons like multiplicity of thoughts and interests, different ideas coming to my suspicious mind".

The so called negative symptoms of schizophrenia were there for too long and too regular.

Miguel adds "They "forbidden" me to pursue my musical objectives. When I started to see some light I used to play again with or without instruction. Most of the time I improvised and counted uniquely with my ears and not much knowledge. Last year I was creative, and I saw the end of my existance scarily close... I think I didn`t became the musician I want to be, but consider myself amateur, I don´t know where music goes with me but I hope to create new music in future, again, in spite of feeling locked again right now. I am more improviser than anything else".

Fortunately, now we have recorders and computers, otherwise Miguel's music works would be lost!

Miguel says "Lately, I think to improve and if health allow me may be I would like to try Cello or Double Bass too. I am eclectic about music, I listen and get my influences from several bands and artists that reflect the present and the past".

Miguel adds "Nowadays people with schizophrenia can have better quality of life, but it also depends where people born and live. In Portugal politicians use the word "schizophrenic" in parliament just to attack each other, or inspire what is foolish or wrong... They don`t really care about people suffering from mental illness, they do something cosmetical due to the imposition of the "trends" in the world, and what it supposed to happen in a developed country. We have laws, it is all written, but no more than that because in reality nothing applies".