Though challenged with ectrodactyly, Zhang Heng is a little star among his music community. He is the amateur singer and piano player of Art Troupe of Shanghai Minhang District Disabled Association.

As a music lover, he was taught to play the piano at the age of 4 though he has no five fingers like normal people;

As a warm-hearted Social Work Organizer, he tried his best to strengthen all kinds of resources to help those who are with worse physical conditions.

He also likes guitars, drums. It is difficult for him to click the guitar strings and to hold the sticks of drums. Nevertheless, he still persisted in practicing.

Here is the story of Zhang Heng, a small man always with big, optimistic smiles. 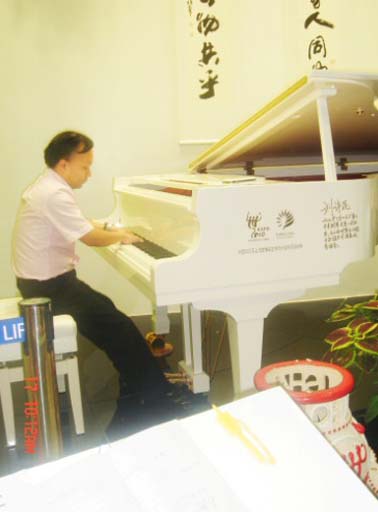 On February 27, 1980, a new baby previously named Zhang Heng came into the word at Shanghai No.6 hospital. Unlike any family who welcomed a newborn with happiness and eagerness, the little Zhangs parents faced great shock, worries and even deep fear for his future fate.

This is an abnormal baby, a baby borne with strange hands and feet. The 2 small hands, without 5 clearly respective fingers, neither palm, each of them has only 2 fingers. The 2 small feet, is also without soles, with the only two big fingers curved upside like claws of lobster. How terrible it is! With the first sight at this small monster-like baby, the poor mother got fainted. When she recovered, she cried so hard. What happened to my poor baby? How will he survive in the future? The poor mother fell into deep sadness.

God gave Zhangheng a different life. However, he lived a distinctive life. With his strong will, he always smiles at all difficulties he had encountered. Although he is lack of digits, he makes up for with love and kindness! Going through various bullying at school, humiliations in society and, prejudices at work, he not only created happiness for himself and his family, but also brought happiness and hope for people who is challenged with more serious conditions.

What Zhang Heng had is a disease called ectrodactyly,which is caused by genetic reasons. Zhang belongs to one of serious types. Though there is some flexibility with his hands, his feet are rather serious. He has to walk on his shin because he has no sole on his feet. This will cause serious hurt after a long walk. What is worse, this physiological hurt will be with him for a lifelong time.

Though having gone through various insults, bullying and difficulties in his growing up, Zhang Heng is always strong. What is surprising is that he has the power to accept all prejudices and unfairness, which for him, are only ways to hone himself. He says "I dont care how others look at me. It is normal I am a little different from others". He adds "The most important is, I can do what others can do, I am the same as them as human!" "What exists is reasonable". Though Zhang Heng is not a lover of books, he often speaks out famous sentences spontaneously.

The spirit of "I can do it" and "never give up" is reflected through Zhang Hengs growing up.

To learn playing pianos, he worn out his small fingers;

To attend a long-distance interview, he rode bicycles for 5 hours until the seat became worn;

In consideration of his own suffering from the real world, Zhang Heng pays special sympathy to those who are weakest in the society. In his own neighborhood, he organized a small Helping- Others club to help those much seriously handicapped people. On festivals, Zhang will organize parties and attract donation for them.

He spared his free time to teach the elder people in his neighborhood to learn to operate computer for free. Many elders colored their retired life through Zhangs teaching.

He also set a good network with other handicapped people in other cities such as Wuhan, Shengyang and Chongqiong. Through his small e-commerce business, Zhang created many job opportunities for these people and added a bright color for their life.