His father ran a motor repair shop and at the age of seven, Ross was ready to start learning the family trade on a Morris Minor engine his father had prepared for him. However at that time, he began losing his sight; and a year later started at the School for Blind Children at Wahroonga in Sydney.

It was here he began learning the piano; which led to a life long love of music. He won many eisteddfod piano competitions and progressed to 8th grade piano AMEB (Australian Music Examination Board).

Four years later in 1972; he opened a small recording studio. In 1975 Ross expanded this to a 16-track; then 24-track analogue system. 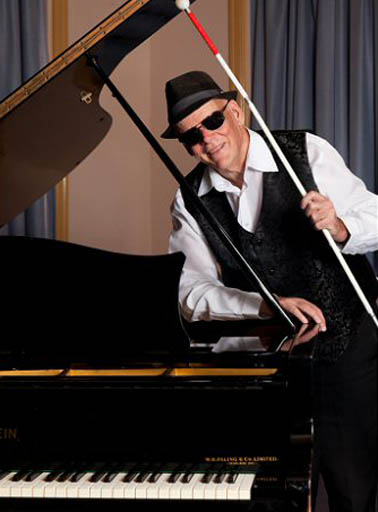 It became the well-known "Axent Recording Studio". He operated this studio until the year 2000. At that point Ross sold the business and relocated to the city of Tamworth; approximately 500km North-West of Sydney.

At the time of its sale; Axent Recording Studio was the longest running independently owned recording facility in Sydney. As founder; Ross McGregor engineered and/or produced over 300 albums in the time he was at the helm.

His work included recording singers and bands in just about every imaginable music style.

Ross has acquired a great deal of experience and knowledge within the industry by specializing in music arranging; album production and mixing.

These days; from his home studio in Tamworth; Ross continues to record his own and other artists albums; as well as songwriting and playing piano and piano accordion with local bands.

Ross says "If I can help any young musos coming along, I'd be glad to".