Proudly hailing from Melbournes West, The Hackkets are a band made up of members with and without disability, brought together more than 10 years ago as part of Footscray Community Arts Centre's ArtLife program and still going strong!

The band originally focussed on covers, immersing themselves in the kind of universal classic hits Rock and Roll that wins over even the most hardened in-car sing-along scrooge, but since 2011 have channelled their love of such classics into their own reinvented AM radio fan-fiction The Hacketts lead singers Stuart, Peter and Victoria bring three distinctly different approaches to the songs they co-write in the band. Stuart merges his twin heroes Elvis Presley and Frank Sinatra with sense of humour that invariably breaks through, while Victoria has crafted her own Rock Chick persona through which she projects a rebel without a cause for the smart-phone generation. 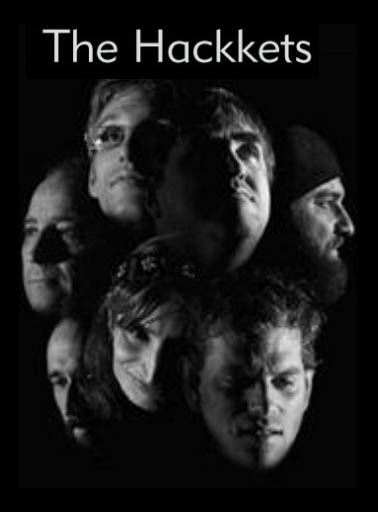 Peters songs explore the anxieties and frustration caused by miscommunication, being ignored, lack of pragmatism or changeable weather.

Rounding out the band are Zac Rush (Darling James, Dan Parsons) on Guitar, Robin Waters (The Boat People, Machine Translations), long-time member and veteren of the live music circuit Joe Vella, and drummer Andrew Pagenella. Of the drums, Andrew says, We had an electric keyboard where you press one key and it plays a whole song but all the songs sounded like Italian songs; old fashioned songs. I chose drums because I want to get somewhere to make the crowd jump out. Once I switched to drums I stayed.

Career highlights thus far include shows at the 2006 Melbourne festival with DJ Dexter, Club Wild, Etihad stadium, The Human Rights Arts and Film Festival, a recording collaboration with Melbourne Cabaret darling Yana Alana and writing the theme song for All of You, a TV pilot for a series made by people with and without disabilities. The Band launches their debut single Mexico LA on October 31 at The Reverence in Footscray. They are currently working on their debut album which is due for release mid-2014.