Tony Dee (aka Tony Doevendans) is a Brisbane-born artist who loves simply putting a smile on people's faces (or sometimes a tear of nostalgia) with his swinging tunes and gentle love songs from the early jazz days to the 1950's and beyond. His singing inluences are Frank Sinatra, Tony Bennett, Nat "King" Cole and Elvis Presley. Tony was born with Spina Bifida and as a result is confined to a wheelchair but is actively passionate about living life and to the full.

His love of singing started to show, as it does for many, in church - an environment that fosters many a great career singer. Picking out one-finger tunes on the Sunday School piano at around 5 years old and singing along with family and friends at small fellowship meetings in homes are some of his earliest musical memories. 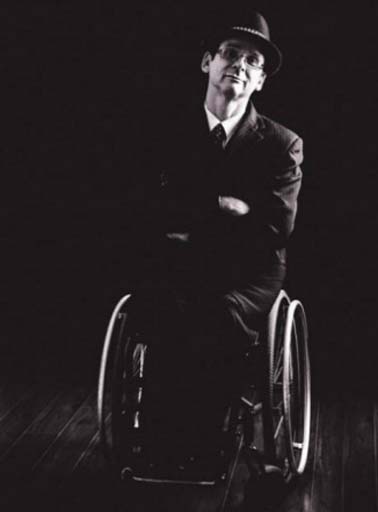 After a lull in singing activity for several years, Tony was encouraged to do more with it at church again, and became a part of the regular Sunday music team. After a while he developed his craft to the point where he was able to be appointed director of all the singers on team.

During this time he started vocal training, as he does not believe in asking others to do more than he would himself. He was also learning to play clarinet at this time and doing some playing with Redland Shire beginners' band and novice band. Eventually Tony kew that there wasn't enough funds to continue both, and singing came to the forefront. He started with tunes from musicals such as Les Misereables and Phantom, but then asked his vocal teacher for some "happier stuff" and as he happened to have some Sinatra tunes on CD she said it would be alright to learn those. He took to these like a duck takes to water, as he just naturally relates to the swing, the vocal bending and improvisation, and the unusual timing of swing and jazz.

Tony has performed at various larger church events such as public Christmas Carols and Easter services, at Bribie Island Golf Club as a guest, and various charity and fundraising functions around Bribie and Caboolture until now, and has been the guest entertainment at Birthday parties for friends, only just now starting to be more deliberate in pursuing music as something that could lead to bigger and better things. His regular participation in Open Vault Nights at the Caboolture Hub have led to an invitation to form part of the entertainment at the 2013 RNA Show, the "Ekka". This engagement has just been completed after doing 10 sets in 6 days on 2 stages and Tony was met with an outstanding amount of appreciation and admiration for his talents. As more than one audience member has commented, an onlooker can tell that he is having a great time whilst performing, and it carries across to the audience, so they have a great time too. Tony has a very powerful voice, reminiscent of Frank Sinatra in full swing, although he is more likely to tell you he is just wanting to capture the spirit of an era. He also loves to softly croon a romantic love song and is capable of learning songs in other languages. He has sung in Tagalog and Ilocano while in the Philippines, and in Italian recently. He welcomes every opportunity to learn more as he has an interest in languages.

When not singing swing-era tunes, Tony actually loves to listen to classical music, old-time rock 'n' roll and contemporary or traditional gospel. He has been involved in playing wheelchair basketball, wheelchair dancesport with his wife, Caroline (they were Australian Champions and were part of the first team from Australia to compete internationally) and ten-pin bowling in the past. We works in an office in Mitchelton and has been married to Caroline since 2004.

Tony would love as he approaches 50 (he is 44 now) to be able to make something more of his abilities and go into semi-retirement from "work", doing more singing engagements and less hours in his office job. He would love perform at your venue or at your function. His dream is by doing this to gather enough funding to make a recording, which he is already assured by many members of the general public would sell well. Another dream of Tony's is to sing in front of live big bands, capturing the essence of the swing era and making a lot of people happy.

In 2016. Tony along with other Can-Do Musos members were involved in the We're The Superhumans campaign in London for the Rio 2016 Paralympic Games.