RIP Lyn Levett. Sadly Lyn passed away mid April 2020 aged 60. She was a huge inspiration and pioneer in creating electronic music. We will keep this page as a legacy to Lyn and her music.

Lyn Levett is am a music producer and musician with cerebral palsy from London. She says "I have a small studio in my bungalow where I work on several projects from my own electronic tracks to doing music for film".

Lyn adds "So when did it all start"? "I really got into music in the mid 80's. I was listening to bands like The The, The Mission, The Cure and U2. That kind of stuff". 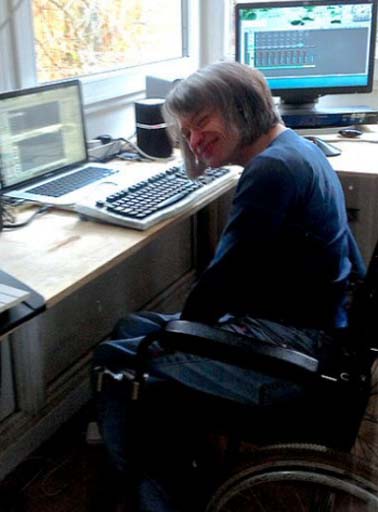 Lyn then started writing songs and poems. She adds "I released a song with Danny Chang in the mid 80s, Afraid of Deep Water which was played on radio 2".

Lyn bought a Commodore 64 that had a music program with it. It was a very simple sequencer that only had a three note poly which meant you could only program three nots at once.

Lyn adds "Then I was on a song writing course as a tutor with Maggie Riley, Where I met Tim Anderson, who was from The Drake Music Project, who specialise in technology to help people with a disability to make music. Anyway Tim showed me Cubase on an Atari St, I was completely hooked. I had the gear and a box with buttons that enabled me to press two keys at once but this is now built into the system's software on any platform.

In 2014, Lyn was commissioned to do a score for a film "Unstoppables" about the Spanish paracyclists training and their taking part in the Olympics. She says "It was my first time that I'd done a real score". Lyn's main challenge was to get into the film to get inside the characters and create a score that matched and enhanced the atmosphere of the film. She adds "Their passion, their determination pushed me extremely hard as I felt we both had something to achieve, and so the film drove my composition".

The film is being shown at major film festivals and it is hoped that tv companies will pick up on the film.

Lyn is releasing her new single "To My Knees" soon. She says "The single was produced on the iPad except for the mastering. I send all my mixes to Dug Wolfsohn. I feel it's better to have a second pair of ears just to be sure it's ok&qupt

For this single, Lyn used an app called Gadget which is a sequencer that allows you to tap in notes, or in Lyn's case, with her nose, to form music structures. Lyn adds "The voice I got from the Freesound web site that has royalty free samples. I cut these up and put them into a drum sampler, where I pitched them so that they were in tune with the track".